This week is Singing in the Rain, which is fun... but means I'm busy.  Nothing new there then!
Posted by TopChamp at 12:34 am 1 comment: Links to this post

On Wednesday we tried to visit the distillery in Tobermory, but it was shut.  We had a drink in the Mishnish pub to cheer ourselves up and ended up staying there for most of the afternoon.  In the evening we had dinner out - which was really highly rated  (using my sister's Quantify game - marking everything out of 10).

Thursday:  We went on a wildlife tour - and it was fab.  The tour guides were knowledgeable and friendly and they took us to areas we would never have visited alone.  Mull Magic they are called and they have a blog!

And the wildlife - stunning!  We saw white tailed eagles, golden eagles, seals, an otter, herons, buzzards, red deer, another deer that I have forgotten the name of temporarily... should I go on?

They have been kind enough to provide us with some photos - so I will pass one onto you. 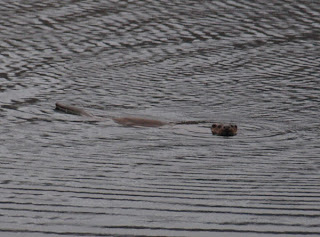 This was our last day on Mull as we had to be back as early as possible on Friday for my sister to get to a hen weekend.
Posted by TopChamp at 11:45 am 4 comments: Links to this post

I got as far as Tuesday in the Mull story.

Our next outing was a trip to Iona.  Iona is a small island off the South-West of Mull.  It is small enough that you can walk around it on a day trip, and is made up of grey stone with sandy beaches and green grassy rolling slopes.

Iona has religious links, with a monastery still existing on the island.  It was the home of St Columba and the monks here may well have made the beautiful pages of the Book of Kells.  I've Wikipedia linked to save me providing a less accurate account of the history... (or getting myself in trouble for copying my beautiful Iona book onto the Internet!) 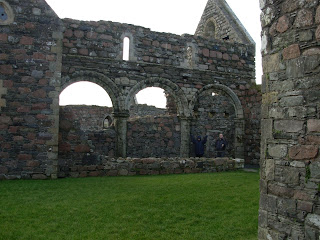 I first visited Iona for a gig about 10 yrs ago.  It was the 50th anniversary of the old minister's ordination, and they held a celebration with his family (his daughter was one of my lecturers at college).  The minister returned to his church and held a service at which I played, then later in the day a party was held and as he had been in the navy I was asked to play some fanfares at midnight.  It was a really good shindig with some very friendly people.  I wished I could join with the wine and celebrations myself and have wanted to return ever since!

Iona is a truly stunning place with an amazing atmosphere and the journey to Fionnphort to catch the ferry takes you through some uniquely dramatic landscape.  Well worth the trip. 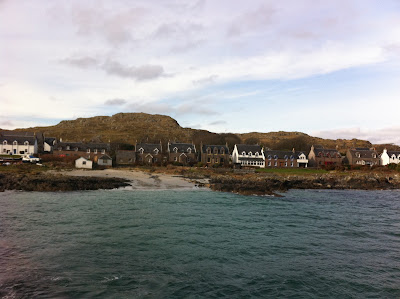 Posted by TopChamp at 6:56 pm No comments: Links to this post

The Isle of Mull

Today I returned from a week away on the Hebridean island, Mull with my boyfriend and my sister.


We left on Saturday catching midday ferry from Oban to Craignure, then on to Tobermory with me driving so my boyf could have a ferry-pint (something he considers a real treat). We spent the afternoon exploring Tobermory, watching Wales beat Scotland in the rugby and relaxing in our holiday home.  This is the view we had from our front windows (with finger for added effect...). 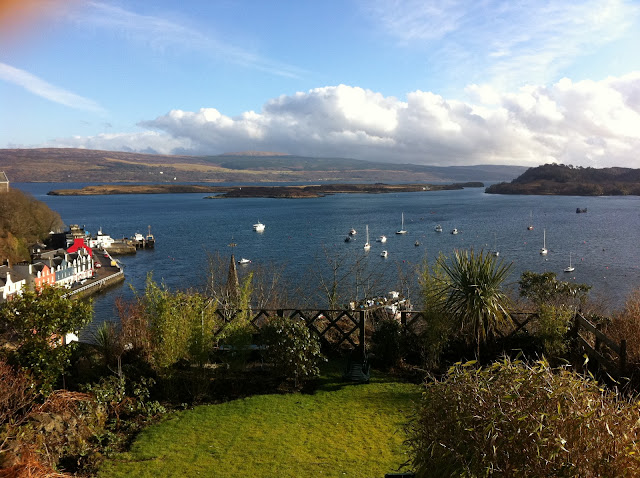 On Sunday my boyfriend got his first taste of driving on the Island with a trip to Calgary Bay. This beach is a large white sandy bay but it looked as though there have been some recent storms, as there was a lot of seaweed quite high along the shoreline. 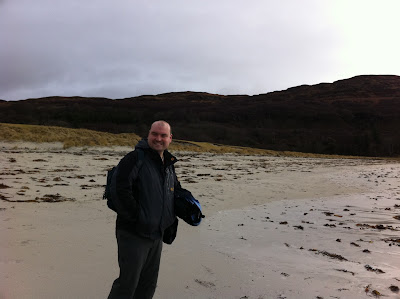 We drove around the North-West of Mull looking at Ulva, Gometra, and the Treshnish Isles.  It was a lovely clear day though chilly (with an icy sea - temperature verified by a toe test).


Monday morning we had a lie in then headed out on the extremely bumpy single-track roads to Salen, wandering along the road by the old pier and exploring Aros Castle.  We saw a herd of red deer in the fields around the castle, and some birds along the coast. 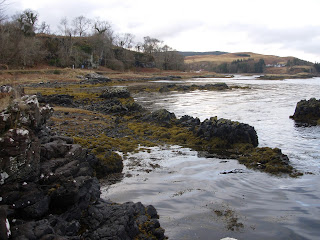 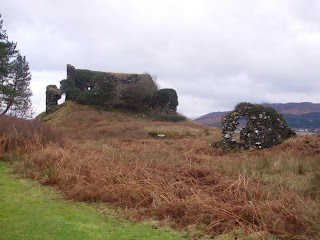 We visited the bookshop and bought ourselves Highlands and Islands Monopoly to while away an evening in then settled down with some chicken chasseur in the cozy warmth of the cottage.

Sunday - Tax return deadline loomed.
We made pizzas with a friend whilst watching Dancing on Ice as she marked her school books and I completed my tax return! (yeah! 1 whole day early!)

Monday - Dentist.  Had a horrible filling that really hurts still - they did something to the nerve to protect it from decay and as it didn't really hurt before, it now is worse for the treatment.  In the long run I realise I'll be glad they did it.  I worked during the evening.

Tuesday - School & Brownies
Leave the house at 07.30 to start work at 09.30.  After school I do a wind sectional for orchestra til 16.15 (no lunch break this week due to extra lesson a pupil needed).Drive home hitting rush hr traffic for the entire journey arriving home at 18.30 if I'm lucky.  Brownies starts at 19.00 and as we have 2 trips coming up there was a load of admin to do when I got home. (working out how much cash we'd actually received and how much is due, plus doing emergency contact lists and a bus list - I won't be there for the 1st trip as I'm working, so it all needs to be done early).

I had booked a restaurant for the evening, to encourage us to go out.  We went to Cail Bruich - which is a Scottish food restaurant - and it was delicious.  During dinner a friend texted to invite us for a drink at a pub which would be on our way home anyway so we met him.  It was fun.  His girlfriend gave us a lift home too- bonus!

Thursday - Office job day.
I felt a bit rubbish this week which I can probably put down to the drinks I had on Wednesday night.  Nothing fun to report.

It had been 3.5 yrs since we had a departmental night out.  When we have brought it up with our manager she has said that the Boss was not interested, or that they could never pick a date.  One of my colleagues decided that we should just pick a date, see how many people could make it, then go for it.  So she picked yesterday.  And all but 3 people said they would come!  Theoretically.

Of course there were a few last minute cancellations, but we ended up with 15 attendees.

It also ended up that our Boss picked up the bill!  Awesome.  Although I mucked up the credit card thing and he actually had to pay for it rather than putting it on the company card as they don't accept American Express.

Posted by TopChamp at 3:46 pm 4 comments: Links to this post