Earlier I did a gig - I forgot my trumpet mouthpiece.  A trumpet is made up of only 2 parts:  trumpet & mouthpiece... so it's a very stupid mistake.

As I left the church my shoe caught and the heel broke.

I was then pulled over by the coppers after making a mistake at an amber light (def amber) - and was charged.  That's £60 fine and 3 points.  For goin through on orange with a taxi on my right getting in my way distracting me........

However I then attended the end of a gig by funk band Fnuk.... and it was great!  A good 3 hrs of boogying later and I'm happy.

Incidentally: the police told me to go out.  I was just following their advice..... ha!
Posted by TopChamp at 2:27 am 3 comments: Links to this post

As I plan to fascinate all...

I wish to inform you that I did have cheese tonight - in left over red pepper & tomato soup (that I made on Weds for a friend) with bread.

It was delicious.
Posted by TopChamp at 8:29 pm 2 comments: Links to this post

I'm on my own for 5 nights as my boyfriend has gone away for a birthday present treat trip to London (that I declined for financial reasons).

What shall I do?  I'd do all the things he hates but he's so easy going there isn't really much... I can eat cheese and tuna.  I think I will do that tomorrow.  I can practise the trumpet lots as I'll have the house to myself....

My Brownies caught the train at a little after 5pm.
We had a change at Partick but arrived safely in Queen Street before heading off to Pizza Hut for some tea.

While the girls (and Guiders) tucked into their mini-pizzas and salad (Hahahahahaha... nachos... that's about the only salad bar option I spotted them eating!) I had to go for a sound check at the venue.  I returned to pay for food then had to leave again as I was booked to play the Centenary Fanfare to open our event.

The gig started at 7pm with approx 2000 members in attendance I believe.  My Guiders/Helpers/Mum got the kids into their seats with their goody bags in time for us to start.

The background music faded, the light dimmed, a microphone was put in the centre of the stage at the Royal Concert Hall and I was on.  By myself.  In a spotlight!  Performing the Centenary Fanfare composed by Claire Griffin.

2 mins later the fanfare was finished, and the real entertainment started.  Clyde 1 fm hosted the concert and after a little chat from the beautiful blonde compere Pearl and The Puppets were introduced.

Pearl and her Puppets were great!  I snuck into the auditorium and found my unit - who were loving it too.


I hung around for a bit. 20million toilet trips later I had to leave to head back backstage to prepare to close the event.

We then saw dance group The Fusion who were also brilliant - and very popular if the screaming and shouting was an indicator! 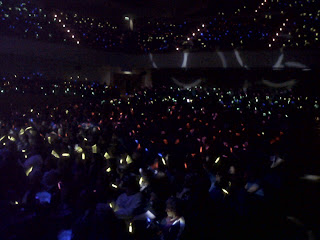 Following a few thank yous I had to head back to my very scary spotlight to play Taps - then off home we shot on the 20:53 train.  This is a shot from the stage (snuck on in the corner partly to distract myself partly to have a look at what was going on!).

I was very proud of my pack - they were very well behaved and had a great time - well done 310th Brownies and well done Girlguiding Glasgow!!!
Posted by TopChamp at 9:14 pm 5 comments: Links to this post Think it's ok to have this up here? It says division etc...
Posted by TopChamp at 9:39 am 3 comments: Links to this post

This year we have been celebrating 100 years of Guiding.

Our year-long party culminates next week with a nationwide make or re-affirmation of our Promise.  In Glasgow we are going to the Royal Concert Hall where we have a big concert with pop acts and radio hosting as well as other exciting stuff.

I am nervous about this because I have to open and close the event with a solo fanfare.  In front of 1700-plus people I kind of know or have a link to.  It's strange - playing to strangers is dead easy but performing to friends and family is horrible.  So I am sh'tting it.

I am also a little nervous as we have all our Brownies going (except 1 who says she doesn't want to go and that her mum is making her come to Brownies.... I only discovered this when it was too late to get another ticket anyway, so I am leaving it be for now.)
I was quoted 75p for return tickets by Scotrail but when I phoned back to buy them the price had somehow doubled. Still - we have to get there.

To try to make the whole thing a bit less stressful I have elected to add dinner to the mix.  We are all going to Pizza Hut first...  Sometimes I wonder where I get these ideas from!!!

And I am up now because I want to get this stuff done - sorted - finished - organised - before Ma & Pa arrive.  I have counted the promise badges (special limited edition ones for the Centenary).

I have written the Promise Certificates for our 4 new Brownies who will be making their promise for the first time.
I have packed the cloth badges from the division.
I have packed the name badges we made in wks 1 & 2 in anticipation of this trip (and to help the new ones learn names of the others).  They are fake VIP passes and they look amazing - I might blog them for any Guiders out there.  Amusingly the kids all think they can actually use them for the gig... they'll be too busy to remember when it comes to the night.
I have printed spare consent forms as I'm missing a few.
I have written a letter to go to the ones who missed the last meeting where we provided final details of the trip.
I have sorted out the emergency contacts - updating mobile numbers wherever poss as we're using public transport for this one and I'd like to be able to text them if there is any delay getting home.

We are still doing up our house - we have today steam cleaned our carpets. Before the descent (ascent?  Wales - Scotland) of my parents we need to tidy our bedroom and steam clean the tiled floors.
Posted by TopChamp at 9:08 pm 4 comments: Links to this post

I was woken up v. early again, this time by my boyfriend getting up to climb a hill. A trip with his friend taken on the only day off that we have shared several wks (and for at least a couple of weeks to come). A trip on which I was not invited - this is a munro-climbing day for him - ouch.  I have work today - but not til 7.30pm.

So this morning I've done a bit more DIY/decorating (adjusting a sheet for our new bed).  Would you like to see? 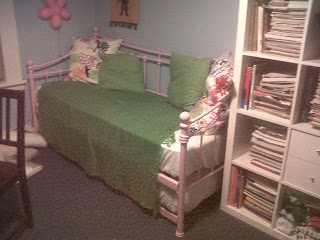 I've also read a book (finished a chick-lit book my friend left after her recent visit).  However I am meeting a friend at 1pm (- no plans to sit around the house waiting for him to come home!! -) and I am concerned I might be knackered come gig time tonight.  It affects your concentration - tiredness.

Maybe a quick nap would be in order.
Posted by TopChamp at 11:48 am 2 comments: Links to this post

I'm a bit tired and am wondering WHY I'm awake at 7am when I don't need to be at work til 2.30pm, and have had 2 long days in a row that I expected to sleep well after.

However I didn't want to leave the impression that I'm a big grump-ball so decided to let you know all is well.

Which it is.
Posted by TopChamp at 7:39 am 3 comments: Links to this post

This is why still having a blog's a bonus.

I am frustrated by a friend who annoyed me this morning.

He is hassling me for phone numbers but on my blackberry I can't send them as text business cards. So it's a pain. And I don't see why I should help. I've had 3 texts so far and have been working since 8.50. I now have 30 mins break then am working til 8.30 tonight.

I don't want to fall out with that friend but I do want to shout 'Piss Off' at him.

Actually I want to say 'I couldn't care less who plays 2nd trumpet in the matinee on weds, and I don't see why I should be involved fixing someone for it on the Monday when I am a dep myself'. I don't care if the other player isn't my friend - I'll be there for 2 hrs! I am a professional... Its work!'

But instead I have left an answerphone message reading out a number - which is revenge because I know it'll piss him off not just being able to click the link to phone.

I am quite petty!
Sent using BlackBerry® from Orange
Posted by TopChamp at 1:34 pm 4 comments: Links to this post