It's decided... Brass Flourish (trumpet ensemble)... decided by me without any consultation with either of the other players. Nice.

Gig was great - we are fab though so it's not a surprise. Not been paid yet though.

Update: 11:36am... turns out I was paid last night. Only I was drunk and forgot all about it until I just spotted cash on the sideboard. Oops.
Posted by TopChamp at 10:29 am 8 comments:

My boyfriend will crack up if I do this formatting now:

So as you can see - many thanks for your suggestions - it's quite a big list. But mostly of names I can't use or that are funny!


Get the Thursday Thirteen code here! The purpose of the meme is to get to know everyone who participates a little bit better every Thursday. Visiting fellow Thirteeners is encouraged! If you participate, leave the link to your Thirteen in others comments. It’s easy, and fun! Be sure to update your Thirteen with links that are left for you, as well! I will link to everyone who participates and leaves a link to their 13 things. Trackbacks, pings, comment links accepted!
Posted by TopChamp at 7:53 am 16 comments: 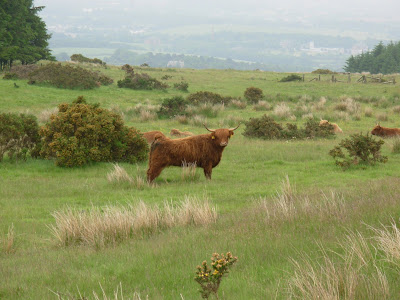 Like the pic? It's a view from Gleniffer Braes - in Paisley where I have been teaching lately
I've been playing in a trumpet trio on and off for a few years and we have always picked a name on the day of the gig... and it's usually been a silly one (Brass Knockers, Wonderbrass -all girls, Brass Necks etc).

Now we have decided to get a bit serious and need a serious name to reflect our new direction.

I'm thinking maybe something like 'Scotia Brass' or 'the West End Ensemble', but need inspiration. I know that bloggers are generally pretty good at this sort of thing and would really appreciate any suggestions you may have.

If they're rude suggestions though they'll have to go into the list to use on shop opening gigs only again...
Posted by TopChamp at 3:01 pm 14 comments:

In my excited blogging frenzy yesterday I missed an important event..... THE CLOCKS WENT FORWARD.

I had arranged to meet a pal for lunch at 1pm. When I looked at the taxi clock (was already running late hence taxi) it said 13:55. I asked the taxi driver if his clock was right.... He said it was.

I phoned my friend to see if she had been waiting for long. She said that she'd realised about 1/2 hr earlier that I'm daft enough not to have noticed the time had changed & that it was fine coz her boyfriend was there too.

Realise that both these questions could easily be answered by her - but I can't really be bothered to have the conversation that question two might trigger.

Update: 3.30pm I realised I had just COMPLETELY missed 2 pupils lessons.... because it was actually 4.30 and I STILL HAVEN'T FIXED THE DAMNED CLOCK! It's very embarassing having to admit to a parent that you've not turned up today for no better reason than you're an IDIOT!
Posted by TopChamp at 10:30 am 10 comments:

Ok - it's been about 2 hours ish since I got the internet working. I am so happy I can't tell you. I was so mad last night trying to get Orange to give me a straight answer I gave myself a headache. I was also pretty rude to the phone operators several times which made me feel guilty.

So - sorry to the people I probably offended!!

During my internet-less month I have been typically busy - gigging and teaching. This has resulted in my missing the last two weeks of Brownies - firstly for my junior wind band final concert, secondly for a gig which I couldn't get out of without losing a lot of cash.

The first week the other leader (Brown Owl) didn't get in touch so I assumed nothing went wrong. I'd provided the activities anyway to make it easy and contacted the division commisioner to arrange cover so thought no more of it.

Yesterday I had a call from the leader saying that a group of girls have been mucking about 2 weeks in a row (hiding in the toilet as little girls seem to like to do!). After being told off the second week the craft I'd bought was bat and ball sets that you could decorate for Easter... slightly random but looked pretty good to me. It seems that the ringleader (also our longest-serving Brownie) didn't like this, so rather than decorate her bat with everyone else she wrote 'Die Brown Owl die. And when you do I'll be happy@. on the bat.

The leader is obviously angry. It's rude. We are going on a Bowling trip - had it been my evening I'd have had her mum in and demanded an apology. Brown Owl hadn't done this - so as far as I'm concerned she's got away with it and is being rewarded with an outing. This in turn makes me angry.

p.s. Could someone ask Mimi for me if there is a reason that her links don't work for me? It's really strange but I can't even comment on her blog and I want to ask about her latest peace globe thing.
Posted by TopChamp at 12:31 pm 7 comments:

I'll post later on but want to go and catch up with you all just now, so I'll be off browsing for a few hours this morning.

Hello, I'm at my wee sister's house in Leeds and she is letting me borrow her internet to check important work e-mails (snigger)....

Feels like loads has happened over the past few weeks but as I come to tell you about it I can't think of anything. Still busy with work but I'm not teaching much any more as I have gigs booked through til August which means I don't have to take any extra work.

This weekend I'm visiting my sis and my folks have come up for the weekend so I get to see them too. Today we're going house viewing as my sis is looking to buy somewhere. This will take up most of the day until we go to see Orfeo in the evening performed by Opera North (for whom she works). Should be a fine day all told.

Monday I'm back in Glasgow and will be launching into a show which will take up this week. The next week I have kept clear as it's my Brownie pack's big bowling trip (competition with all Glasgow west brownie units).

Hopefully I should have the new broadband at the end of next week, which means I'll be back to my usually regular posting....

Until then: I hope that you are all doing well and will pop round as many people as possible before my wee sis cottons on to what I'm up to. See you soon x
Posted by TopChamp at 10:50 am 11 comments:

Hello -I'm still offline. It will now aparantly be a further 10-15 working days before Orange can send out my internet box etc. So I've found a pub with free broadband access and will be heading there of an evening next week to while away a few hours catching up with my friends.

Keep thinking I'll find it easier as time goes on, but there are so many thousands of things I used to use the internet for that make life more convenient that I am hating every single second without my connection. The major ones have been: I was an hour late for a rehearsal last week because I couldn't do an aa routefinder search and have no sense of direction.... I couldn't book train tickets to see my wee sister... although currently this is a good point as Ma and Pa booked them for me and I am therefore £50 richer (temporarily).

Missing you all!!!! Promise to visit you soon x
Posted by TopChamp at 12:46 pm 9 comments: