Putting Together A Proposal

Hello - do any of you know how to go about putting a formal proposal together? It'd be for educational workshops.
Posted by TopChamp at 3:06 pm 2 comments:

Last night I went out to celebrate my friend's impending marriage. We went to the comedy club, The Stand, where hen nights are banned on Saturdays so we had to be on a 'work night out'.

It started a bit ropey but actually ended up being very funny! I now want to know who I saw and if I can find out I will update this later.

OK - I have found one. It's really difficult to find the comedians names - nothing on google. I have had to look for things I remember about them and click on links to recognise photos. I do really have better things... well more important things... to be getting on with. Like practising a bit for the gig this afternoon. Or doing the Brownie accounts.

But this is niggling so I'm gonna keep investigating for a bit.

This was the easiest person to find as he looked familiar and as he had my full attention during his set I remember him well. Michael Smiley - VERY funny. He was last on, and I liked him very much. This had nothing to do with the 2 pints of cider and Crabbies ginger beer I'd consumed by the time he came on.

Found them all! Carol Tobin - we just kept waiting for her to get funny. We all wanted to laugh, but we never quite found the punchline.

Bob Graham - funny. Was he really that pissed? At one point he appeared to take a swig of beer and dribble so it's possible.


If I were to put them in order of funny it would pretty much be as they were billed on the night.
Carol, Bob, John, Michael.
Posted by TopChamp at 10:09 am No comments:

Last night we had a barbecue with some friends.
We made burgers & sausages of course, but also marinated a lamb joint in mint and yoghurt with some brown sugar and roasted it outside. YUM (I heard... there wasn't enough as there were 8 people and it was a little lamb joint).
We brought some cocktail mixes from New Orleans and had already had one at a party a few weeks ago, but we took this opportunity to make up some more.
Crushing ice was fun without any suitable equipment, but with all the usual funny(?) antics that occur when pissed people get hold of ice.
Mixing them up was fun.
Drinking the second round was most fun as my pal had put the ice (in a glass bowl) that was left over back in the freezer and it had set solid.....
So we had no option but to pour the whole lot into the bowl and dig out straws to guzzle it lying on our stomachs on the grass. 4 people played the game (don't think about the backwash from the straws please!).

Today I cleared up and tidied because I had people coming round this evening.
I did some revision for camp.

I arranged What Shall We Do With The Drunken Sailor and Skye Boat Song for trumpet groups I teach.

I practised a bit on my new old new trumpet (was new, discarded as didn't like it so is now old but am using it again as my other trumpet is gubbed).

I did some ironing, then went outside and sat (dozed) in the sun for the best part of an hour. 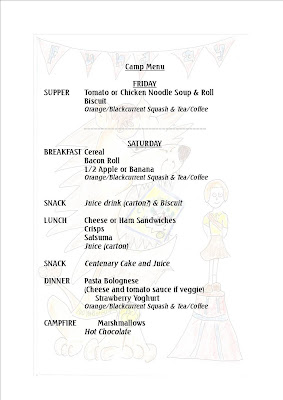 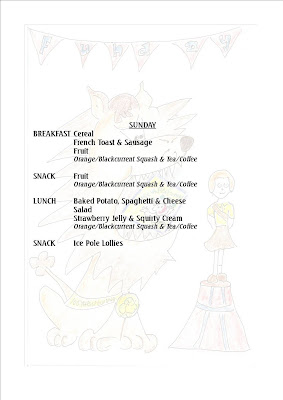 If you click on the pictures the menu should come up nice and big.
Posted by TopChamp at 8:53 am 4 comments:

Ok I know this could well be boring to a reader, but it's my blog of things I want to remember.

So: Our first crafts on camp are going to be welly pegs and bags for their plastic plate, cup, bowl.

I found these bags online for under £1 each. 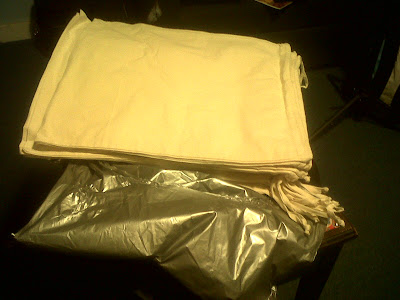 And these packs of fabric crayons for £2.50 each. 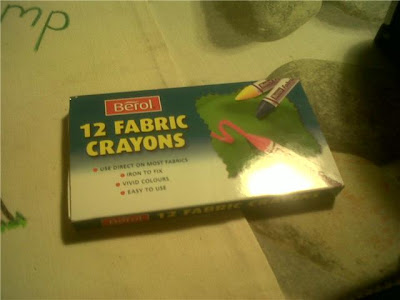 To test out the crayons I gave decorating the bags a shot. 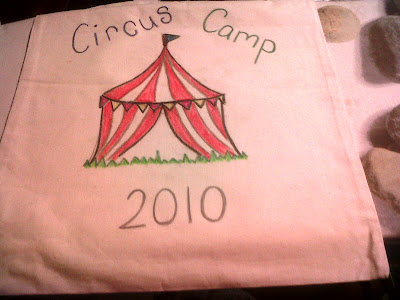 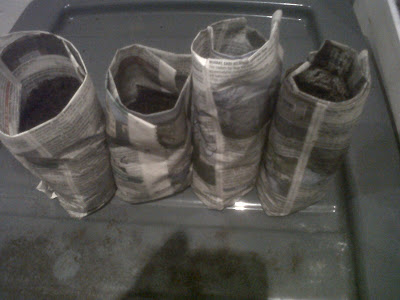 Tonight at Brownies we had a Newspaper Night.

After a very quick game of dodgeball to make use of the big hall we had tonight (which is usually used by the Guides), we began making plant pots from newspaper, then planting seeds.

They had a choice of pansy seeds, marigold seeds and tomato seeds. I think they all chose flowers, which is worth remembering for next time.

We then played games (run by my YL) using newspaper.

In the first game my YL made up a story about a shopping trip. The girls (split into four teams) had to find what she wanted to buy in their newspaper pages... it could be words or pictures. The first example was 'make-up', which stumped them. Not one of them thought of ripping out the words 'make' and 'up'!

The next game was a shapes game. YL called out shapes she wanted ripped out of the newspaper with a time limit. They then had to bring their best shapes up and she judged a winner with an overall team winner at the end.

At the end of the evening, four girls forgot their flowers, so I have some gardening to do this week to get the seeds germinating for them.

Incidentally - we have also done our garden veg plot tonight - I will photograph it as I think it'll be lovely when it grows. We'll have a 'before' and 'after' shot if I take one now.
Posted by TopChamp at 10:40 pm 5 comments:

My boyfriend is weird He brought me flowers... and a giant cardboard bunny.
Posted by TopChamp at 10:09 am 6 comments:

I have seen a whole load of status messages on facebook commenting about how much they disliked the hung parliament, and now the coallition which has been formed between lib dem and conservatives.

I am on the bus just now and can't remember the stats, but conservartives got by far the most votes. Labour were second, but a labour conservative alliance was never an option. Liberal Democrats received around a quarter of the votes leaving them able to join another party to form government.


However strange it may be that they chose Conservatives, they were voted by us to run our country - so we should let them get on with doing it.

So when I see whiney facebook status messages from people who told me they couldn't be bothered to vote.... Well I think they should just bite their tongues and think about what THEY did.
Posted by TopChamp at 8:32 am 1 comment:

I am trying not to stress as much this term.
I have made a to do list, and am starting to tick the big things off: reports are done. Magician (actually balloon modeller in the end) booked.

Fingers crossed this should prevent me getting as tired and cranky as last term!
Posted by TopChamp at 5:38 pm 1 comment:

I have made a toy. 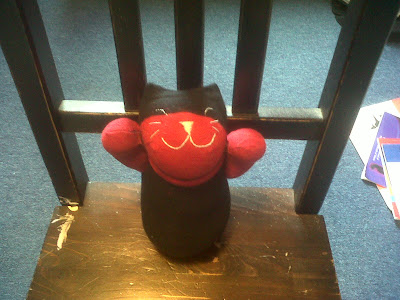 And here is the model. 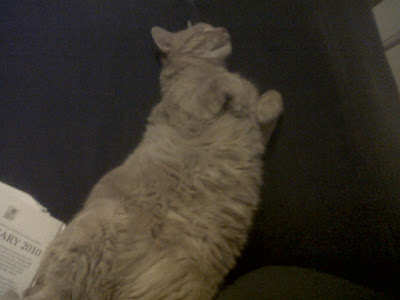 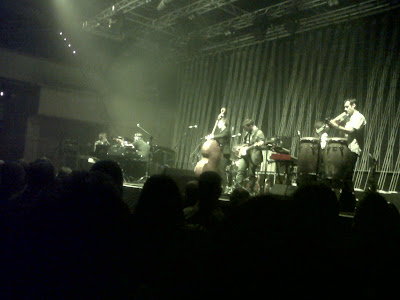 I wasn't sure at first. We were in the Royal Concert Hall, a classical seated venue - which is not somewhere I would choose to hold a rock gig although jazz... perhaps ok. Having seen the gig there I would definitely not choose it. I like standing - so I can move about. Seated gigs aren't my thing.

Jamie opened with Don't Stop The Music and the fun started. He was lively and enthusiastic. You felt what he felt about the songs - his excitement was inspiring.

The set was varied, and he chatted to the crowd. He coped well with the Weegie (friendly) heckling and came across as cool, funny, intelligent.

He played for 2 hours without a break, and I was not bored for a minute. There was such contrast - in mood,style, genre.

Some moments were poignant, some were pretty, some were driven, some were sheer fun. We bopped to the lively numbers, and hung on every word of the melancholy love songs.

The tour is timed alongside the release of his latest album, and I am definitely planning to buy it.

This was a concert I will never forget. 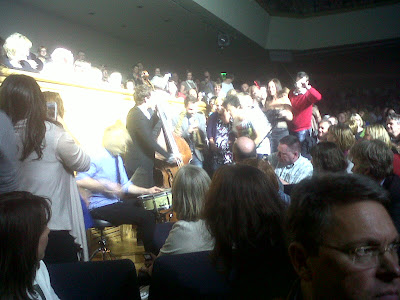 The Support Act - Eliza Doolittle
The gig tonight began with a singer called Eliza Doolittle - daft name - an English girl who seemed to have forgotten her trousers.

She has a light summery style - a little reminiscent of Corinne Bailey-Rae but a bit rougher with more contrasts (better!).

Some of her songs were great - some clever writing lyrically and musically. Some of her songs I didn't like - in particular there was one which had a weird repeated note in the chorus that annoyed me every time I heard it.

I am pissed, but FYI tomorrow we are going to see Jamie Cullum and are very excited about it.

I have done the deed and cast my vote.

Last night I google searched the policy comparisons of our major parties. It turns out that I still prefer the policies of the party I liked best as a student.
Posted by TopChamp at 7:28 am 4 comments: