We then went to watch Glasgow Warriors at home.. they won, but it was not brilliant rugby and I could see that despite my lack of expertise.

It was also freezing and wet.

Next time we see them will be in Northampton.
Posted by TopChamp at 10:07 am 1 comment: Links to this post

I was really lacking in motivation today - I felt tired and a bit down in the dumps after our very lovely nephew and his mum left this morning.   Dixie seems to be missing them too. 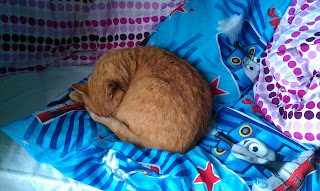 I had also read the intro to this week's run programme and had discovered that I would need to run for 3 minutes at a time.  This sounded hard.

I spotted a comment on my blog - and when I read it I found encouragement from my friend.  Thank you CountryDew!

My other half and I headed out - he picked blackberries and rosehips while I ran round Mugdock Reservoir. 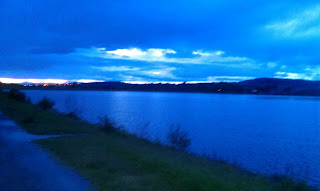 3 minutes of running is a bit unpleasant, but not impossible.  I don't like it so it's hard to make myself carry on for longer times.  One positive was that the 90 second runs seemed much shorter afterwards.

I ended up on the very far end of the reservoir and had not anticipated the walk back.  Having looked it up (just now) it is 3 miles right round the reservoir.  I must have run (interval-training running... part run part walk) about 2.25 miles.  I walked the rest with only 2 minutes of running when I realised how far I had to go to get back to the start.

Having already walked around 5 miles on my commute today I was tired at the end, but we bought some chinese take-away food on the way home and it has turned out to be a very lovely evening.
Posted by TopChamp at 10:23 pm 6 comments: Links to this post

Ran with my pal and her dog again last night - managed week 2 day 2 (though day 1 was a bit of a cheat, as I didn't really have time on the way to and from spin class) without ill effect!

Today: Spin with my friend, but have a feeling this one might be the crazy spin instructor man who makes you sprint for 45 mins.  I hated that one... will feel good afterwards though.
Posted by TopChamp at 7:42 am 2 comments: Links to this post

Today: Tried the training on the way to the gym for spin class.


Found spin class MUCH better - could do the whole thing without cheating (admittedly I was taking the 'half-turn' option whenever the instructor said 'turn the resistance on 1 whole turn, or 1/2 turn'...)

Tomorrow at Brownies we are talking like Pirates.  We have games, songs and a craft.  Should be fun!
Posted by TopChamp at 1:33 pm 2 comments: Links to this post

I have stuck with it for 1 week - a good start as according to the plan, I only have to do 5 weeks to get to run 5K.

This week I ran for 1 minute 8 times, on three days with a 90 second walk between each run.

So this week: I could go again today, but you're meant to have a day off.  I could do it tomorrow instead of spin class... but I wonder if I could do it as well... Perhaps I will interval run to the gym, see if there's a space in spin (hoping secretly that there won't be), then walk home.

Update: Have booked spin.  It normally takes me 25 mins to get there walking, so I think it will need to be:

Hopefully that will get me to spin on time - and warmed up.

Or would I just struggle to do the spin class if my legs were already tired?  It'd only be 2 mins of running so I think I'd be OK.

Not sure I'll be able to walk home though!
(actually there is no choice about that - there's no other way home... it's too close to get the bus without embarrassment).

Yesterday we had a Brownie sports day thing in Glasgow.  499 Brownies signed up to try a range of activities.  We got to do cheerleading, relay races, long jump, high jump, discus, play on a bouncy castle, try out a climbing wall and take part in basketball and rugby training.

It was great!  The girls threw themselves into it - I was very impressed.

We had a slight wobble here and there: one girl was upset she didn't get higher on the climbing wall (she's only just 7 and I think just wanted a little attention) and another got a little bit hurt in rugby when a Brownie tackled her badly - she told me tearfully "It's just I've never done any of these things before..." and was calmed down easily with some reassurance.  A promise to make sure we tell her Mum how impressed we have been with her sent her back off to join in the rugby for the last 15 mins of the day.

If I could change anything:  I would have liked a morning break - we had some very hungry Brownies by 12.40 (lunchtime) after a 9.30 start.  We were provided with fresh fruit at lunchtime and I think it would have been more sensible to collect that in the morning with the bottled water and eat it between the first two activity sessions.

So.... What's next for us?  Tuesday is "Talk Like A Pirate Night".  I have found a pirate story to make into a game, AG is going to show them how to make pirate hats from newspapers, Old YL now L is going to find some pirate songs.  New YLs have no job as they were running a game whilst we discussed this...  might need to work out how to involve them more.

After that we have a trip to Drumchapel library (hopefully - keep forgetting to phone them.  Will go and do that now) for a treasure hunt.  We did it before, and it was brilliant.  We hid clues in some books: "Do you need to find your way?  Look for the book of world maps" - next clue hidden in Atlas, "He loves honey, and has a very bouncy friend" - next clue in Winnie the Pooh for example.  Can't actually remember them right now - we'll think of better ones!

Otherwise, we're doing the sports badge thing and will start planning pack holiday either for November or for Spring term.

Hope Southern units are enjoying the start of their term!  I'm loving being back.
Posted by TopChamp at 2:37 pm 1 comment: Links to this post

One more to do this week - tomorrow morning or evening or Saturday.....

It's quite rewarding but I find it hard.  Even running for just 1 minute in a burst is quite hard.

Will keep updating as I like having the record here.

Update: Last night I went for the run immediately after work before a Brownie leaders meeting (2.25hrs or meeting!), in strong winds and a bit of rain.  I managed the whole programme but ran out of time for the warm-down walk, and sat all sweaty and red in the meeting.
Posted by TopChamp at 10:42 pm 3 comments: Links to this post

This morning I did spin class. It really hurts...
Now I want to sleep. I think I might have a long warm bath. I might play sudoku while I bathe.
That sounds nice.
Posted by TopChamp at 11:43 am No comments: Links to this post

to try or not to try....
Update: Tried. It was ok. I think I will do it - it's a 5-week training thing and I downloaded podcasts from the NHS website to use.
Today I did the first bit - which is a brisk 5minute walk, then 60secs running, 90secs walking until you've done 8 repetitions at which point you do another 5mins of brisk walking.
I had a bit of extra walking after that since I ended up at the shop to buy water and found I'd run SO FAST (?!) that my money had fallen out of my pocket. Thought about retracing steps but I'd wiggled around the park quite a few times and it could have been anywhere. It was only £2.00.
Posted by TopChamp at 9:52 am 1 comment: Links to this post

I have been following a Weightwatchers plan, and I have lost quite a lot of weight.
I would like some new clothes. I would like these clothes to have an open neckline and to have sleeves. I had not considered this to be demanding, rather quite standard requirements.
THERE ARE NO NICE CLOTHES ON SALE IN THE UK!!!!!!! (Except in Monsoon and I don't have hundreds of pounds to spend on new clothes while I am still on a diet).
It seems the current fashion is for floaty opaque shirts - many of which are sleeveless (a look I find weird), or pretty tops with high round necklines (which I like but don't suit).
Rubbish.
I want to share a moving Brownie moment from our first meeting of term.
A new (started at the end of last year) Brownie who is 7yrs old came to our first meeting back this term with an A4 notebook. She brought it over to show me - her Brownie Notebook. She had taken time in her Summer holidays to make it.
She had decorated the front, and had put her name etc in the inside.
She had filled up the beginning of her notebook with drawings of badges she got last term (she got THREE!), which she had cut out and sellotaped into the notebook along with drawings of her Six emblem and her Promise badge.
She had written the names of some friends, she had made notes of what she'd enjoyed so far......
Then was the page titled "Things I Have Learnt At Brownies".
To be nice to people.
To make new friends.
......
......
......
To put my sleeping bag out properly.
Ha! A VERY important Brownie skill.
This sort of moment is what makes Brownies such a pleasure!
During the Summer a Guide Guider pointed out to me that the Brownies age-group are little enough to let you know when they are enjoying things, which is rewarding. She was right.
It's lovely to think that what you do - or what you provide them with and enable THEM to do -has an impact, an importance, a meaning.
Did I mention before that I love it? I really do.
Posted by TopChamp at 6:32 am 3 comments: Links to this post