My boyfriend and I rarely have timeoff together. Today we are both off work.

He wants to do something fun today - and I really don't.
He wants to go out for lunch, to head into town... to GO somewhere to do something.
I want to knit my slippers, to practise the cornetto, to teach later, to do some journalling.
He wants me to come out with him.
I want him to do something here - like finish painting, or play his new computer game, or garden. Or to go OUT without dragging me into it too.

I am busy working for the next few weeks almost all the time, so we won't have much time again for a while.

By rights we should be trying to spend this day together - but I am finding him really annoying as he's pottering around the house when I know he wants to go out and do something. I wish he would just go and do what he wants to do and leave me alone!
Posted by TopChamp at 2:20 pm 4 comments: Links to this post

We had a halloween party at Brownies tonight - it was fun. I dressed as a witch - and quite enjoyed it to be honest. I got to wear more eyeliner than I've worn in my life and it was good practise for a real grown-up halloween party I'm thinking about turning up to next week (or the end of this week... whichever halloween is).

We played some games - like wink murder and musical scary statues.

We sang some songs (the Pink Panther - because one of them turned up dressed like the pink panther).

We ate some party food.

And then I cleaned up a LOT of mess. We ran out of time for apple bobbing, so next week they are making chocolate dipped apples with hundreds and thousands. They'll love that. I'm off - working - so I'll miss it. Good luck assistant - I'll find a parent to help.
Posted by TopChamp at 11:53 pm 2 comments: Links to this post

and accepted.
Posted by TopChamp at 8:11 am 2 comments: Links to this post

It just came to a head.... I told him he was pathetic. Always a good idea, right? He told me that 'the one thing I was enjoying...' which was going to end "about the party was my music" or something along those lines - as that's what he told me on the night.

However the sentence was not finished because I went nuts. "Seriously? The only thing about YOUR party, full of YOUR friends, that your FAMILY came up for, that I spent a day cooking YOUR choices of buffet for... the ONLY thing that you were enjoying about that was your music?".

He's been quiet since then. As have I.

I am terrible at leaving things that annoy me alone. I can't be annoyed about stuff silently. And I can't talk about you behind your back - so feel very safe in the knowledge that I'll tell you exactly what I think.

Anyway - now it's all out there in the open I'll be able to forget all about it. So the confrontation is entirely selfish, and is possibly something I should stop doing. I don't know.
Posted by TopChamp at 12:32 am 2 comments: Links to this post

Well that's the visit over. It was good fun - but I don't think I'll ever be comfortable around his mother.

On his actual birthday we took a trip to Callander to go to the Rob Roy exhibition (which was amusingly bad when we visited in the past), but it had closed. So we took a scenic drive home. We then went out to dinner (after I had finished Brownies, of course).

On the next day I spent the morning preparing a buffet for 30 people, played a gig in the afternoon, came home to teach and we then went out to his birthday party in a local pub. He was in his element as he could plug his own MP3 player into the sound system. The other guests (in particular his Mum) seemed less enthralled after a few hours of it, so I asked her if we should put on the 'party mix' (from his sister's boyfriend's ipod). Her reply was 'Yes, might liven it up a bit'. So I plugged it in.... and he chucked a wobbly. I wanted to smack him and am still annoyed about it now actually. There's nothing he can do to change it but from that moment on I did not enjoy his party, and had it been anyone else's I would have left. Rude arsehole. Honestly - thinking about his petulant reaction makes me genuinely angry. I have never wanted to walk out of anywhere as much. But I didn't - I stuck it out and smiled. I tried (and failed) to talk to his mum. I bought drinks, drank drinks, ate buffet, chatted to my friends and to some of his colleagues.

He enjoyed himself - which is the main thing. He was clearly very happy to have his sister, mum dad and sister's boyfriend here. His sis is fantastic and her boyfriend is very funny. I like them a lot.

And now he's officially old. Ha! Lucky for me that I'm not planning to turn 30 ever.

I am having a nice time tonight doing nothing - it's pleasing me greatly. However by writing the above I've wound myself up again so I think it's time for me to go and get a(nother) glass of wine!
Posted by TopChamp at 9:21 pm 9 comments: Links to this post

Happy Birthday to my Boyfriend! 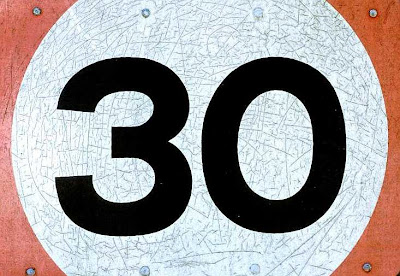 (so far so good with the visit too btw)


Posted by TopChamp at 9:12 am 6 comments: Links to this post

My boyfriend's parents are coming to visit this week. They are due to arrive this afternoon.

It will mean I either blog lots and lots through the stress of it. Or blog little because of the fun we're having.

Hope all is well with you all. I'll let you know how it goes!
Posted by TopChamp at 12:40 pm 4 comments: Links to this post

happy birthday to my blog!

It's two years old the day before yesterday, and I'm surprised to discover I've been going for so long!!
Posted by TopChamp at 10:09 pm 4 comments: Links to this post

Did you know that from Broughty Ferry beach you can see a family of dolphins?

We went for a morning visit to the beach. After a quick whizz round the museum we headed for the sand. Then my friend pointed at the sea and claimed to have seen a dolphin.

Ever the sceptic, I dubiously looked over to find that she was right! The dolphins swam back and forth getting closer and closer to us, until from the shore we could see them coming out of the water and diving back in.

It was an amazing end to a fun holiday.
Posted by TopChamp at 10:51 pm 2 comments: Links to this post

Today I'm going to the seaside and I am very excited. At the moment I am sat in my PJ's playing on my friend's computer while she's out getting fags and cheese for cheese and ham toasties. She doesn't put cigarettes in the cheese and ham toasties - they're just for her!
Posted by TopChamp at 10:06 am 4 comments: Links to this post

I am thinking bad things about people completely unfairly. I am usually more inclined to think good things. It's making me feel guilty - Maybe a conscious effort to snap out of the grump is required.

Tomorrow I have a hard gig, then on Monday I am going away on a short holiday break to see my friend. Only to Dundee, but it's out of Glasgow and not work-related so I am excited. It's definitely time to get away for a break. Recharge the batteries and all that.

Posted by TopChamp at 11:45 am 5 comments: Links to this post

You are a self-employed musician. You are asked to do a gig 6 months in the future for really bad money.

You take the gig because you have nothing else booked for that week and there is no reason not to.

At the end of the phone call, the amateur booker says 'OK great. So you won't drop out now before the gig will you? I mean we really want to get this sorted out firmly right now.. etc'.

What do you reply?

I reply something like 'oh yeah of course sure...' (bearing in mind I'm a good 1/2 bottle of peach schnapps down by the time of this conversation)...

I am THINKING though: "Who the hell do you think you are? The money for this is sh't so if I'm offered something for a decent fee what do you think I'm gonna do??".

Amateurs.
Posted by TopChamp at 10:07 pm 6 comments: Links to this post

Brownies: We have some kids making their promise tonight so it's the old Hostess badge while they do it with parents there nightmare evening that I am expecting.

Other stuff: Gig-wise there's a fair bit going on and I am nervous about a gig this weekend but generally all is good. There's a video on youtube if you're interested in seeing me in action... with my trio friends.

Sorry I haven't been a very good blogger this week - I'm just very busy but I do appreciate your comments and will be round properly soon. First I must get this Brownie night over with!!
Posted by TopChamp at 5:41 pm 8 comments: Links to this post

As we have previously established, I really don't understand American politics. Seriously - how is there even still an election race here? Surely that side with nutjob Palin on can't be an option really? SURELY nobody with a brain would actually elect McCain. So based on that logic with the reported closeness in the polls, I'm not getting an particularly rosy view of American intellect from our press.

Or am I missing something?
Posted by TopChamp at 11:32 am 8 comments: Links to this post

Today was my first Christmas gig of the year. Seriously.


Well according to the many recipes, all of which were similar, take 1lb sloes, 1litre gin, 1 wineglass of sugar.

Prick the skins of the sloes and drop them in the gin (obviously you have to remove some gin first or they won't fit. 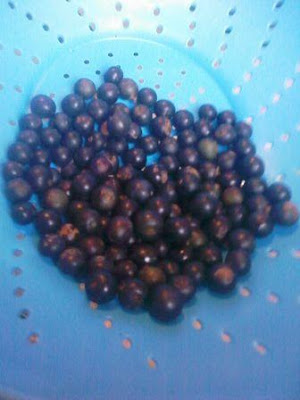 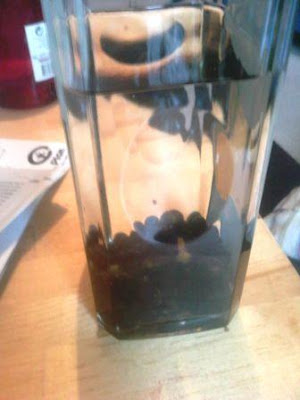 I went for putting half in an old vodka bottle).

Add the sugar and shake. 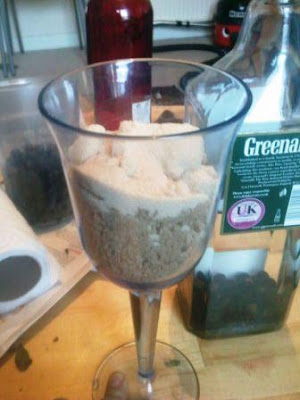 Shake daily for a week then weekly for two months.

In my wisdom I decided to make this sat in the front room watching telly. This was due to the number of berries I would have to prick. It seemed daunting without other entertainment, but I can't remember what was on the box so it must have entertained me more than I expected.

This is the colour it is at the moment.

Posted by TopChamp at 12:54 pm 6 comments: Links to this post